Disclaimer: The following blog post is not a reflection of the University of Wisconsin-Madison’s opinion on the Reagan administration or American foreign policy, rather it is an analysis and retelling of the consensus on UW Madison’s campus in the 1970s and 1980s.

The Reagan administration’s foreign policy was imperialist in nature and in cause. The anti-communist agenda of the American government in the last half of the 20th century allowed the executive to fall back on its colonialist roots under the guise of worldly protection. Following the failure of the Vietnam War, the United States government needed something to boost its morale. It found this something in the weak and newly established sovereign nations of South and Central America. Here, the Reagan administration really shined. It drew on the same propaganda distributed throughout the Vietnam war to garner support for the invasion effort. Nation-wide, students gathered to protest this crude attempt at swelling the U.S.’s sphere of influence. The University of Wisconsin-Madison was an epicenter for these protests. While hosting only a small number of Latinx students, the campus gathered to ensure that the United States would not throw thousands of lives away under the deceptive name of capitalism.

Those who had fallen victim to the charms of the United States government did not hold back their critiques of the protest movement. They claimed that the protesters were wannabe flower children who pined for the influence that Vietnam War protesters had; that they were so eager to make a change, they scrambled to organize before the government could even attempt to justify their infiltration of a sovereign country.[1] These counter-protesters ventured to minimize the message of the protest so that they may continue to blindly back a conquistador government whose ancient desires of power and domination were thinly veiled by a fictitious fight for freedom. The similarities between the Vietnam War protests of the late 60s and early 70s and the anti- U.S intervention protests of the 70s and 80s were not lost on the protesters either. Rather, the similarities were capitalized on.

It was not the protesters who were trying to re-live their glory days, but the United States government making the same exact mistake. The late UW Madison History Professor and activist, Harvey Goldberg, claimed that the various invasions in these Latin American countries are, in part, an embarrassing attempt to rewrite American history to overlook the great failure of Vietnam.[2] Even the government promises centered around these issues are echoes of each other. The Reagan administration assured that “there will be no ‘Americanization’ of the conflict in Central America,” which bears a stark resemblance to “Lyndon Johnson’s repeated insistence during the early days of U.S. involvement in Vietnam that he would not involve the U.S. in a ‘wider war.’”[3] The Vietnam struggle may have ended a decade earlier, but UW Madison’s students let the government know that they did not forget.

Much like it had in Vietnam, the government justified its invasions to the American public as a protection of their own national sovereignty. It promised that without these preventative measures, the Latin American countries that it was invading would become strongholds for the Soviet Union. The government’s fear of being confronted by the Soviet’s had apparently forced it to countries such as Nicaragua, Grenada, and Chile. Countries that were just undergoing their first revolutions to give power to their people, a sentiment that the United States should have recognized from its history only 200 years before.[4] The late Eugene Havens, a professor of rural psychology at UW Madison, “criticized the Reagan administration for equating self-determination with communism.”[5] Reagan continued to push communist propaganda regarding the Sandinistas in Nicaragua and similar revolutions in Grenada to garner support from otherwise unwilling American Citizens. Reagan’s supporters spouted this knowledge as an end-all to the controversy: “no sober adult should still harbor any doubts about the character of the Sandinistas…oppressive, revolutionary, Marxist—which must serve as a basis of American policy.”[6] Rather than examining the internal dynamics of these Latin American countries, the US claims that all failures and revolutions are a result of a Cuban or Soviet Marxist conspiracy.[7]

Further justifications of invasion where fabricated where necessary, including a call for the protection of human rights. The genuine purpose of the Reagan administration’s extensive and explosive foreign policy was the defense of American business and commerce, any other reasoning provided was simply an excuse to garner citizen support for their next massacre.[8] False accusations of poor treatment of the Miskito peoples by the Sandinista regime were used to justify American intervention in Nicaragua.[9] Similarly, American medical students being in Grenada at the time of the military coup were used as a scapegoat to justify yet another imperialist maneuver.[10] The Reagan Administration had a never-ending stream of excuses as it unjustly murdered Latin American civilians to ensure its influence over these areas didn’t wane.

Pleas to focus on the home front rather than foreign nations rang from both sides of the conflict. Some critics of the protests thought the protesters were misguided, and that there is oppression occurring on America’s own soil that needs attention. Of course, the protesters would agree with this sentiment, though that was a fault the United States government needed to bear. For it was the government, not the protesters, that was meddling in foreign engagements as its own human rights issues lay unattended to.[11] Multiple protests focused on the diversion of spending as a critical issue in the conflict. Protesters of the military and monetary support of the Contras in Nicaragua discuss how this intervention not only revoked the self-determination of the Nicaraguan people, but it also forced funds away from U.S. social programs and toward the military: “for every gun that is sent out of this country, people starve.”[12] As the invasions wore on, the UW Madison protesters formed multiple coalitions to deal with issues as they arose, with reinvestment into U.S. social programs being a key factor.

To protesters, it was clear that the Reagan Administration would only halt its invasive foreign policy if the domestic price was made high enough. Yet, after two terms of incessant protest to his actions, there was no change. The unpopularity of the Reagan Administration’s foreign policy remained, only to be remedied when Reagan left the oval office. The message may have been lost on the executive, but its intention and its power remain. Its importance is diminished only slightly by its lack of immediate impact as it builds upon the history of resistance to faulty American policy. The modern members of this University should look back on these pervasive students and be comforted in the opportunity they have to continue the legacy of such an insistent and unfaltering group. 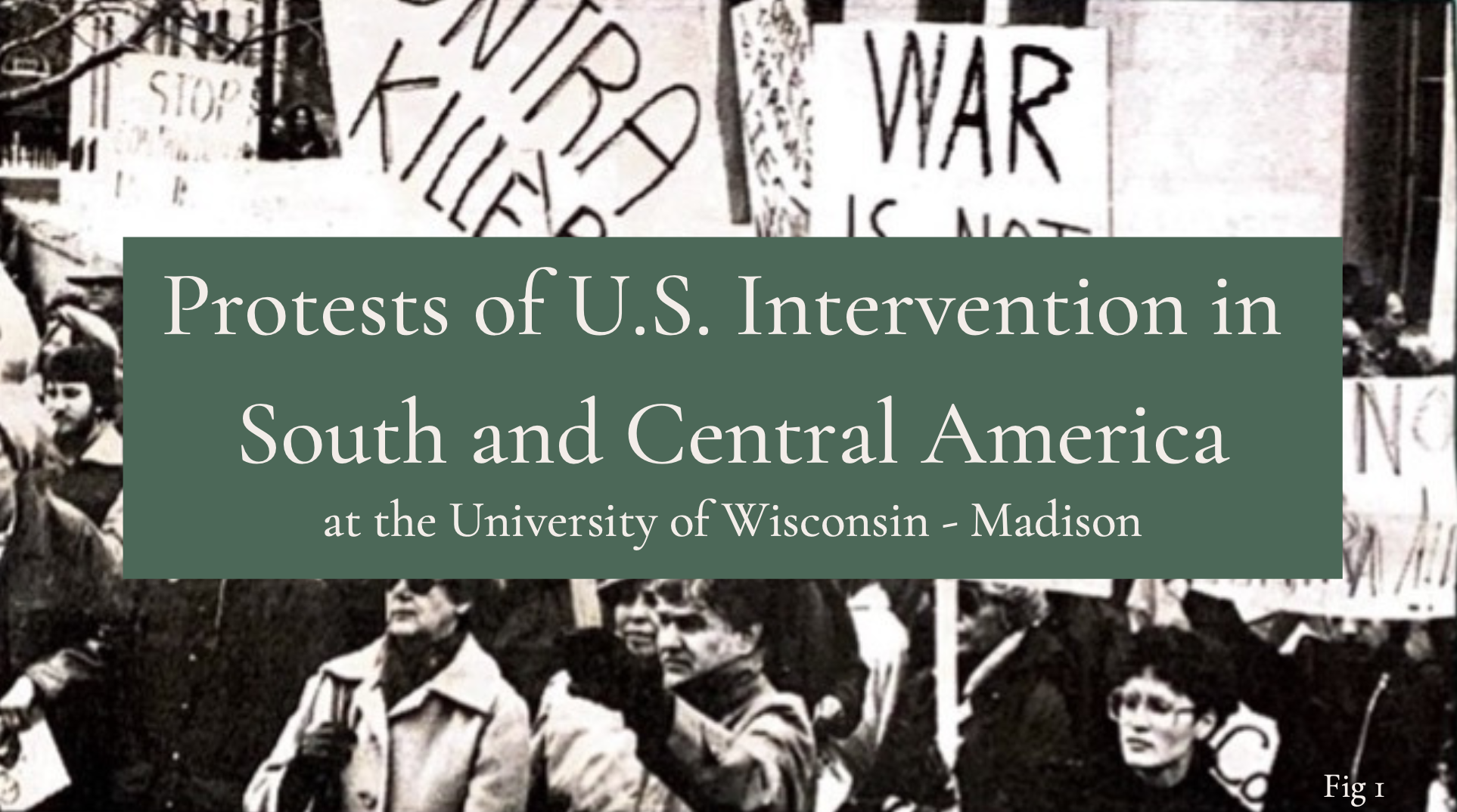 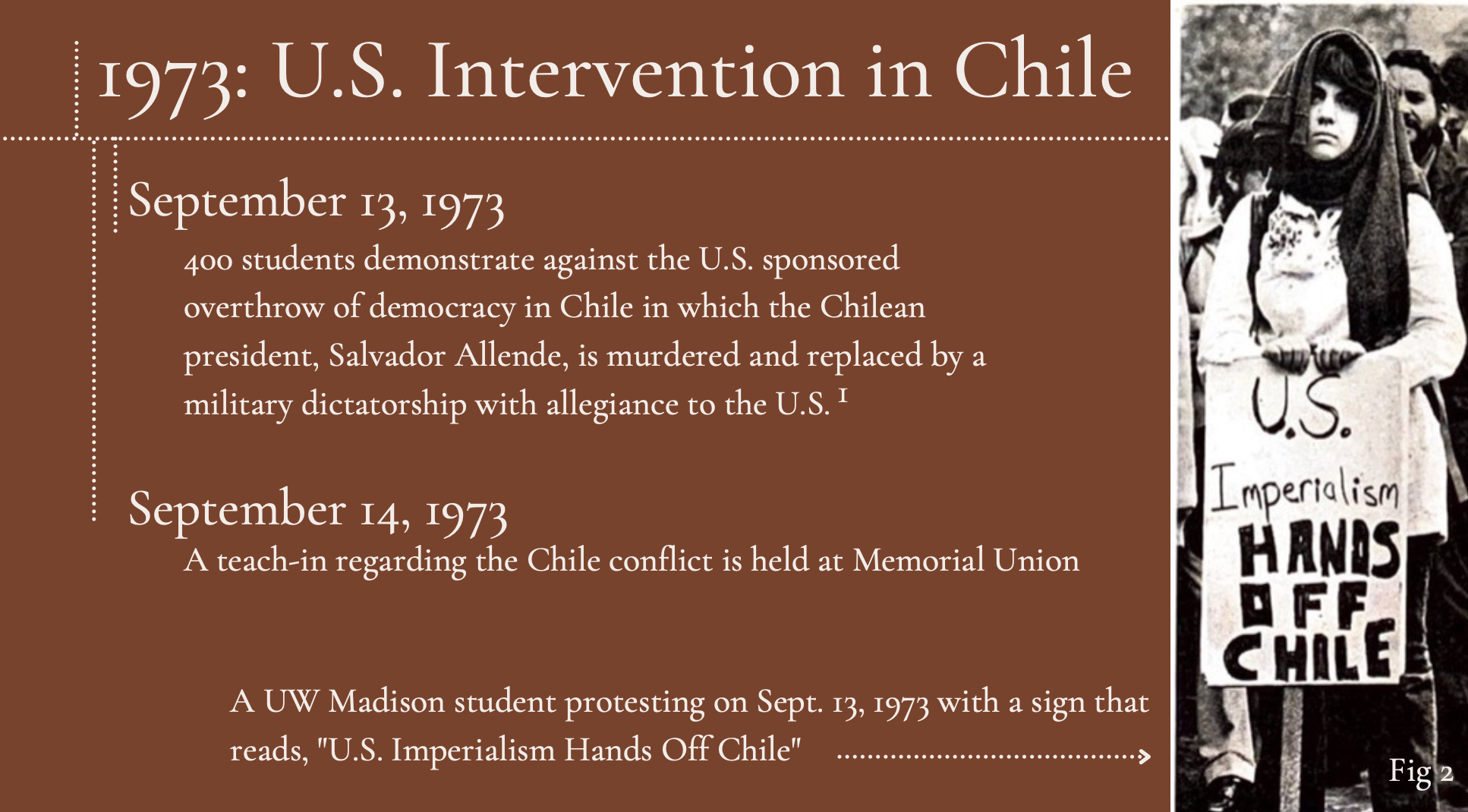 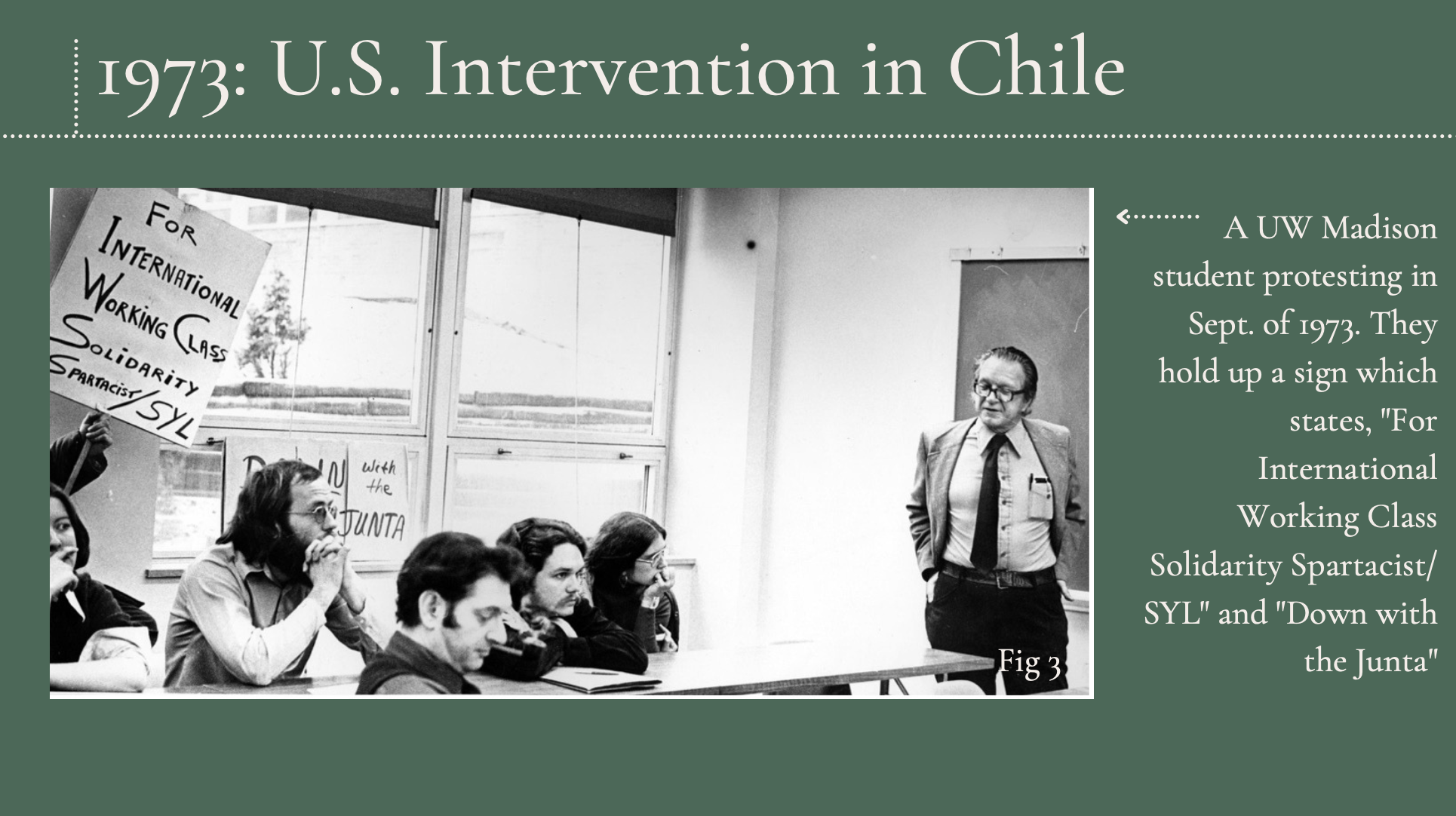 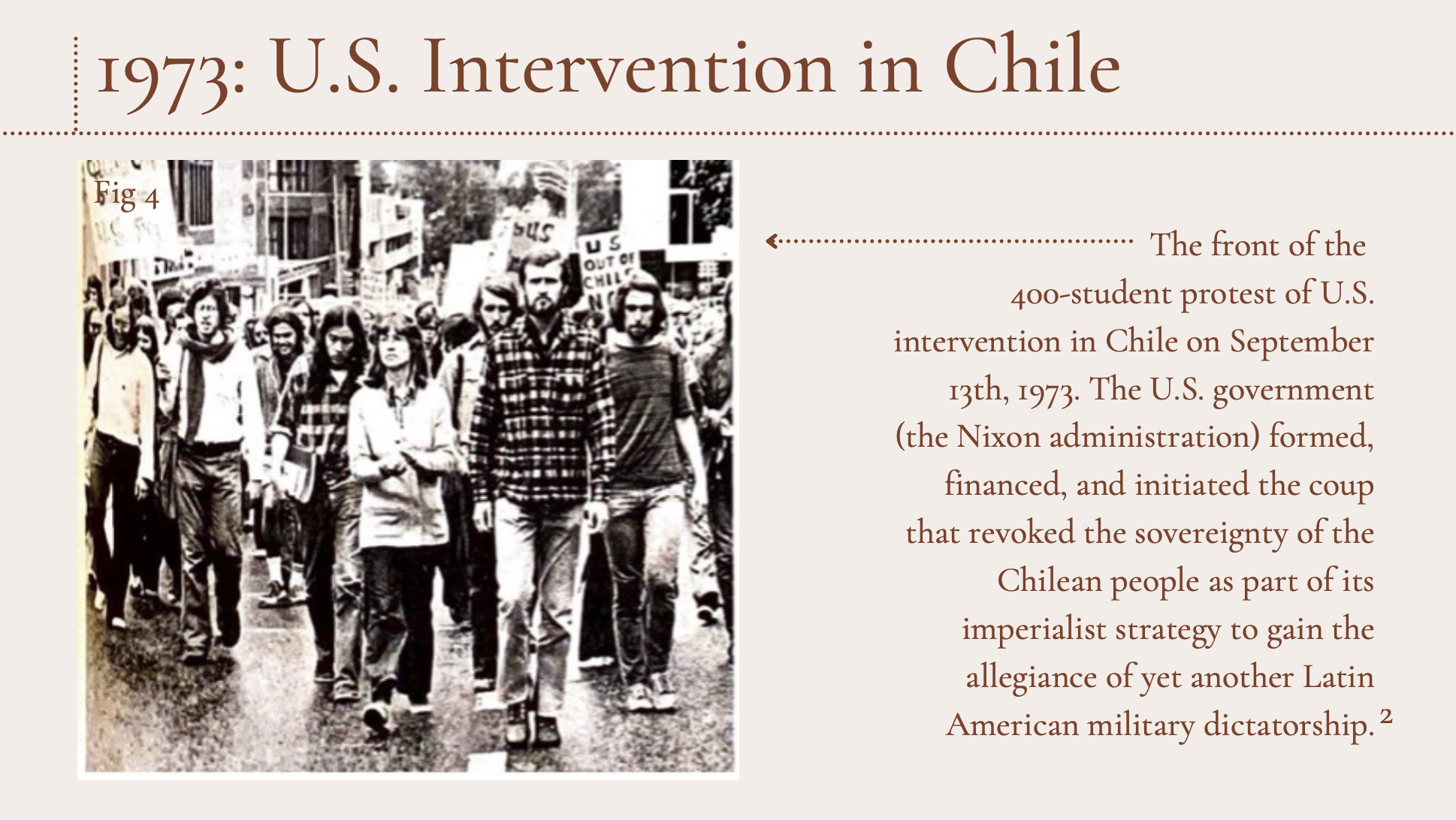 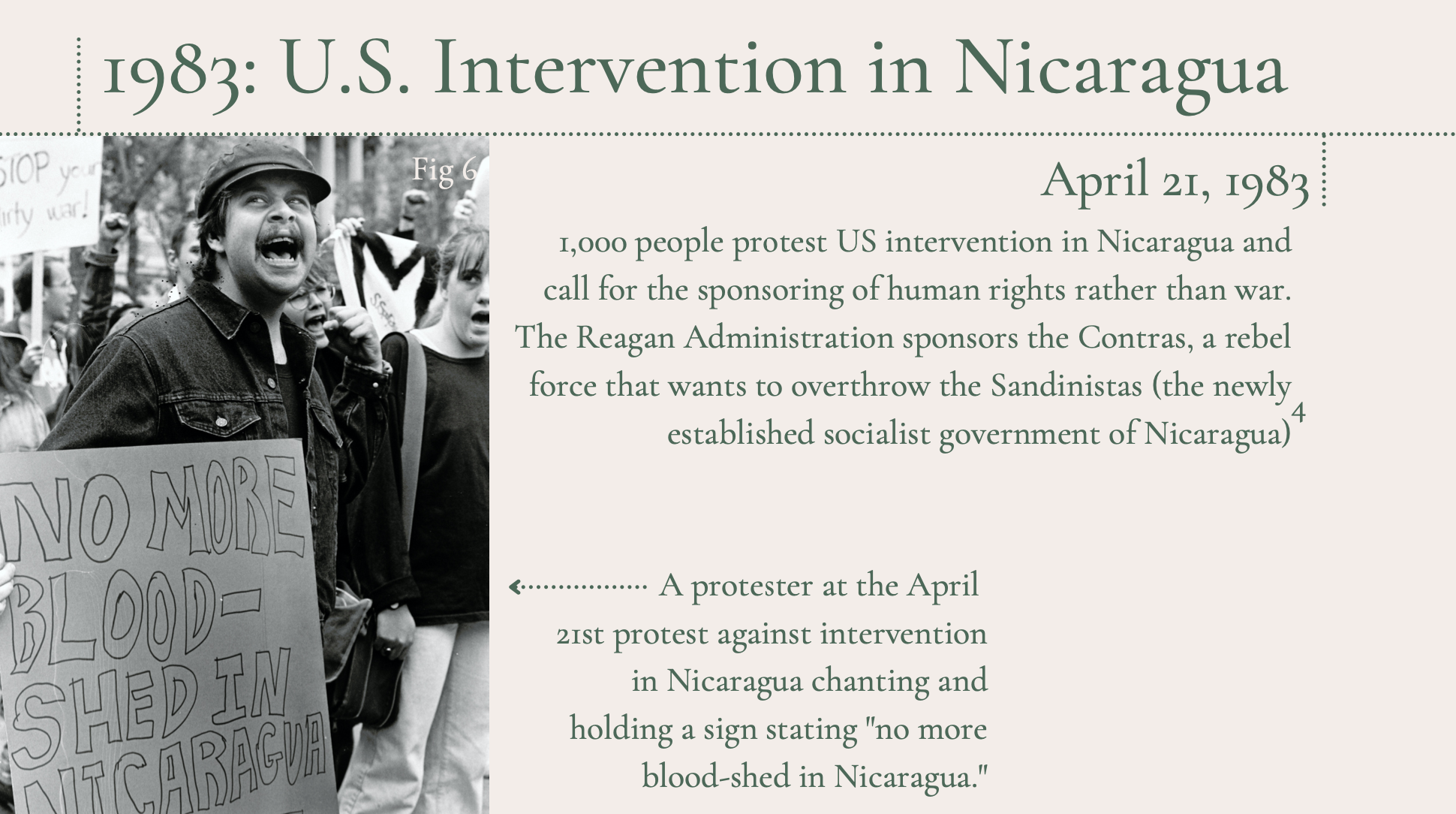 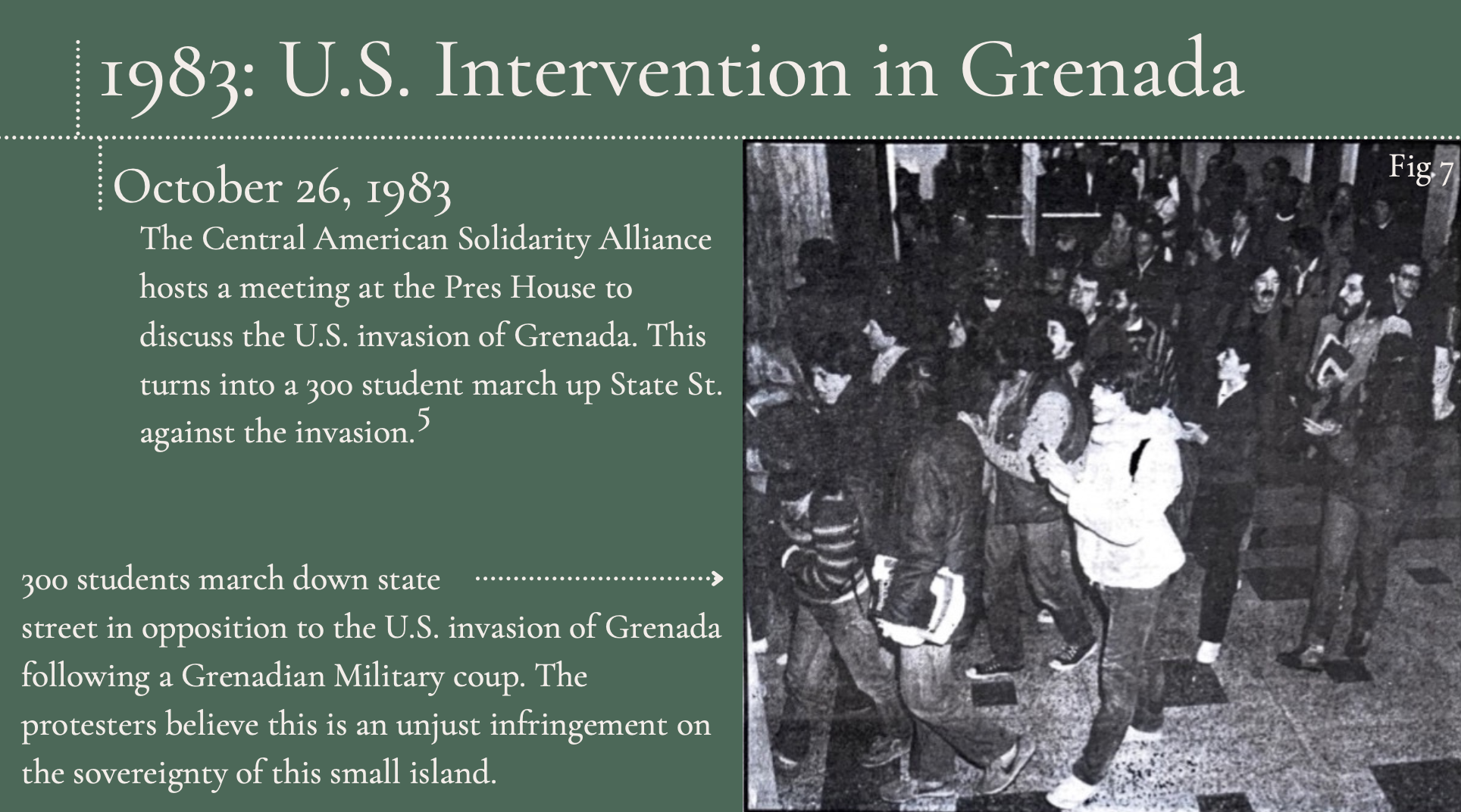 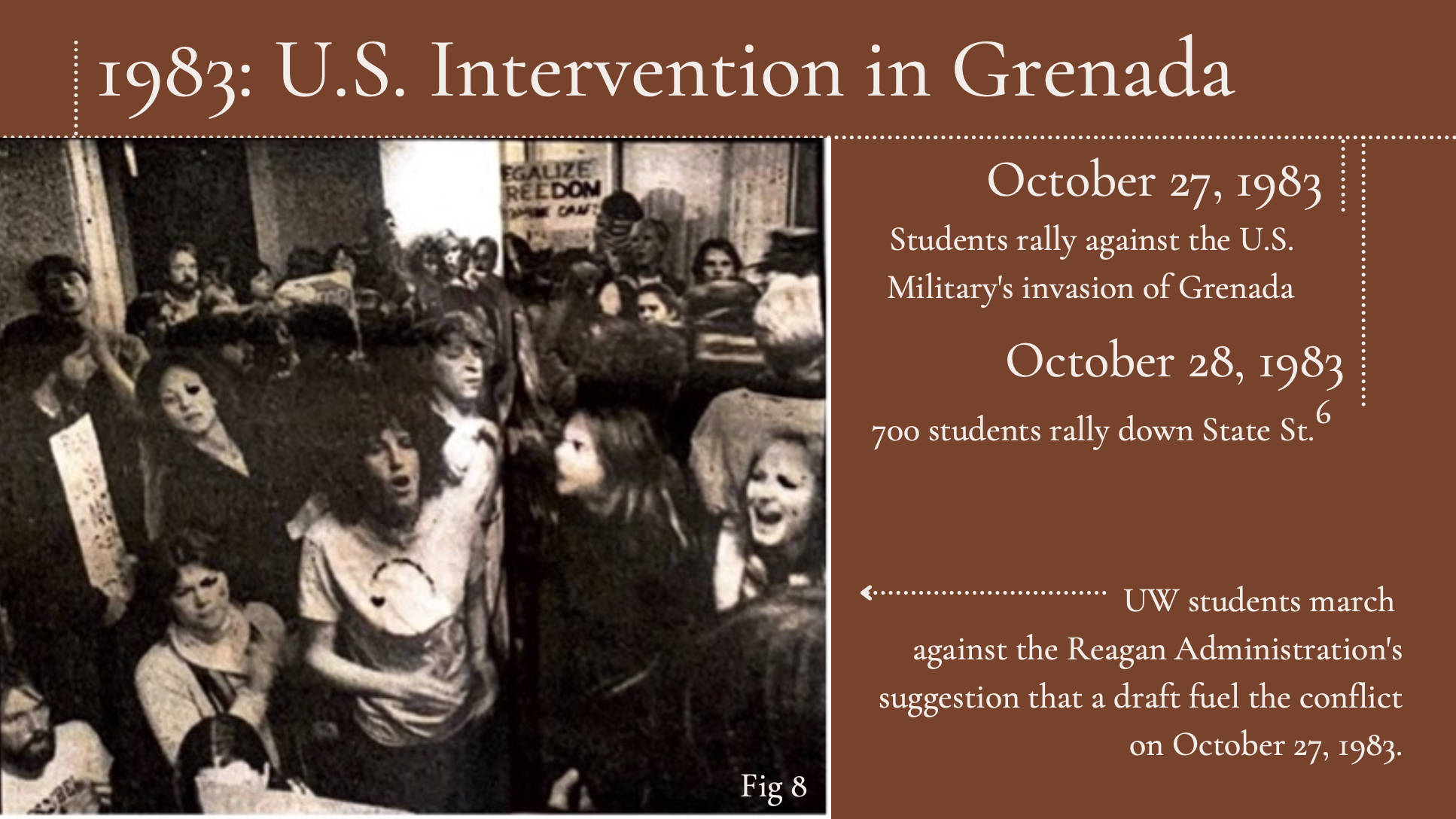 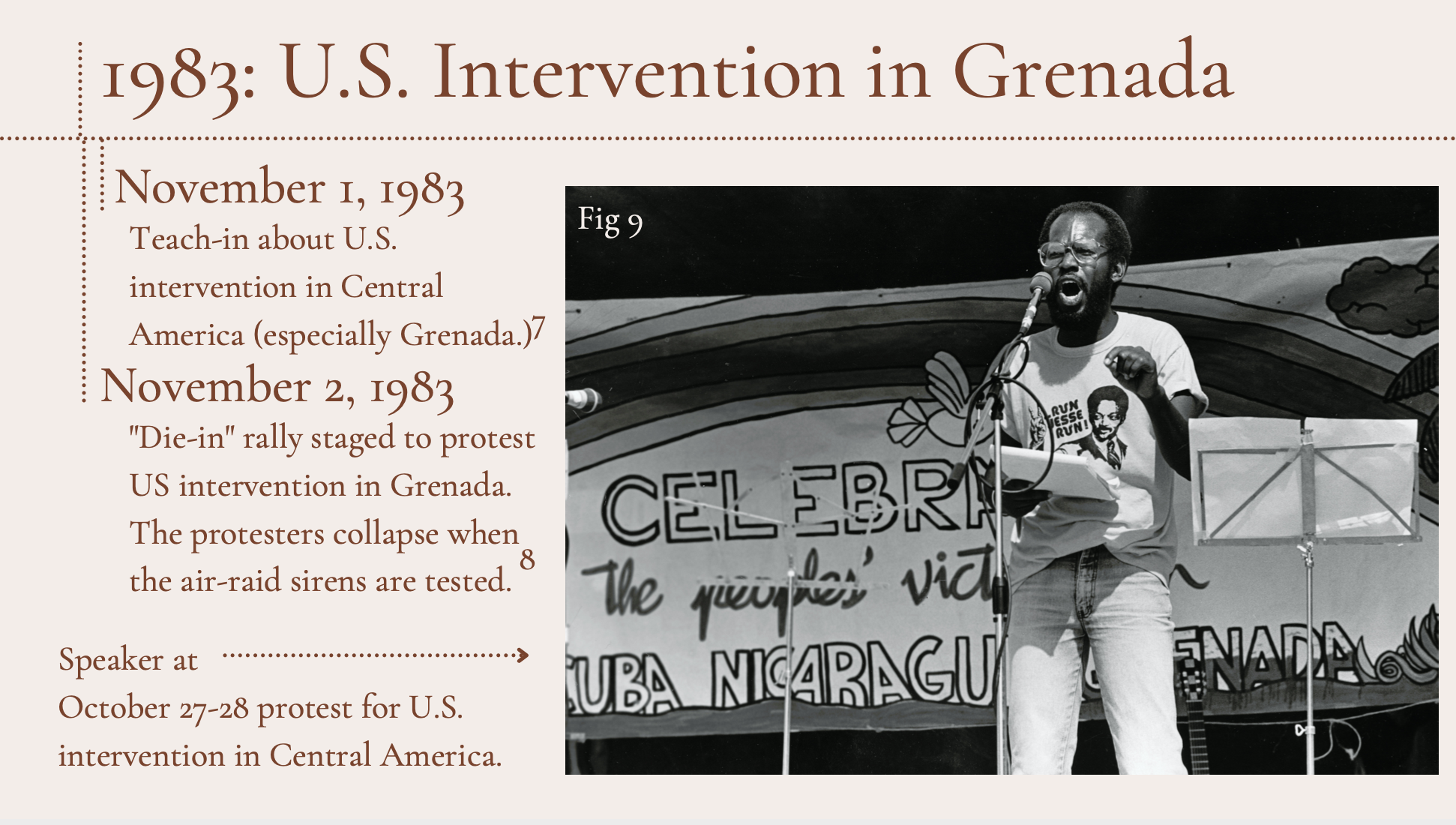 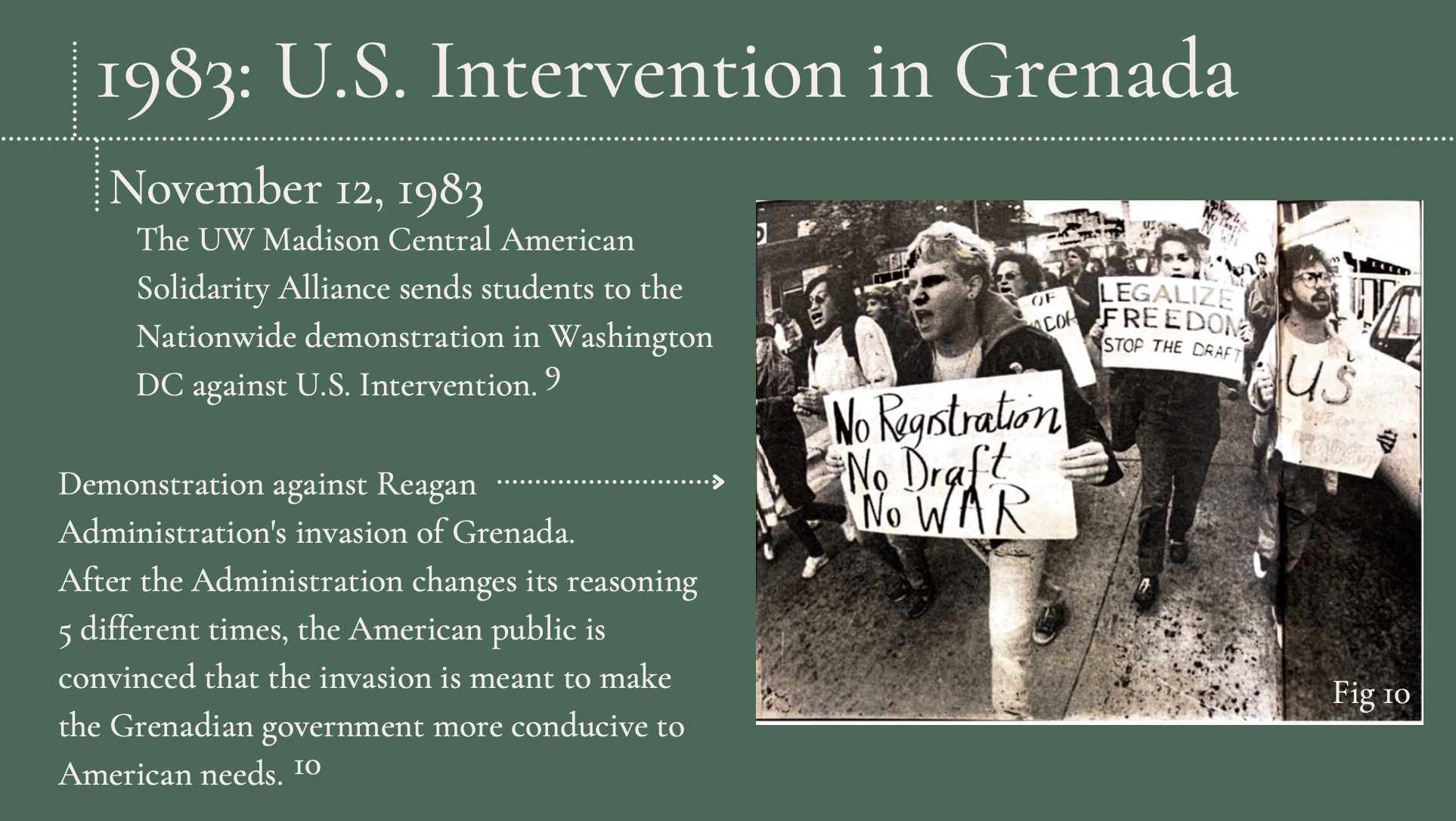 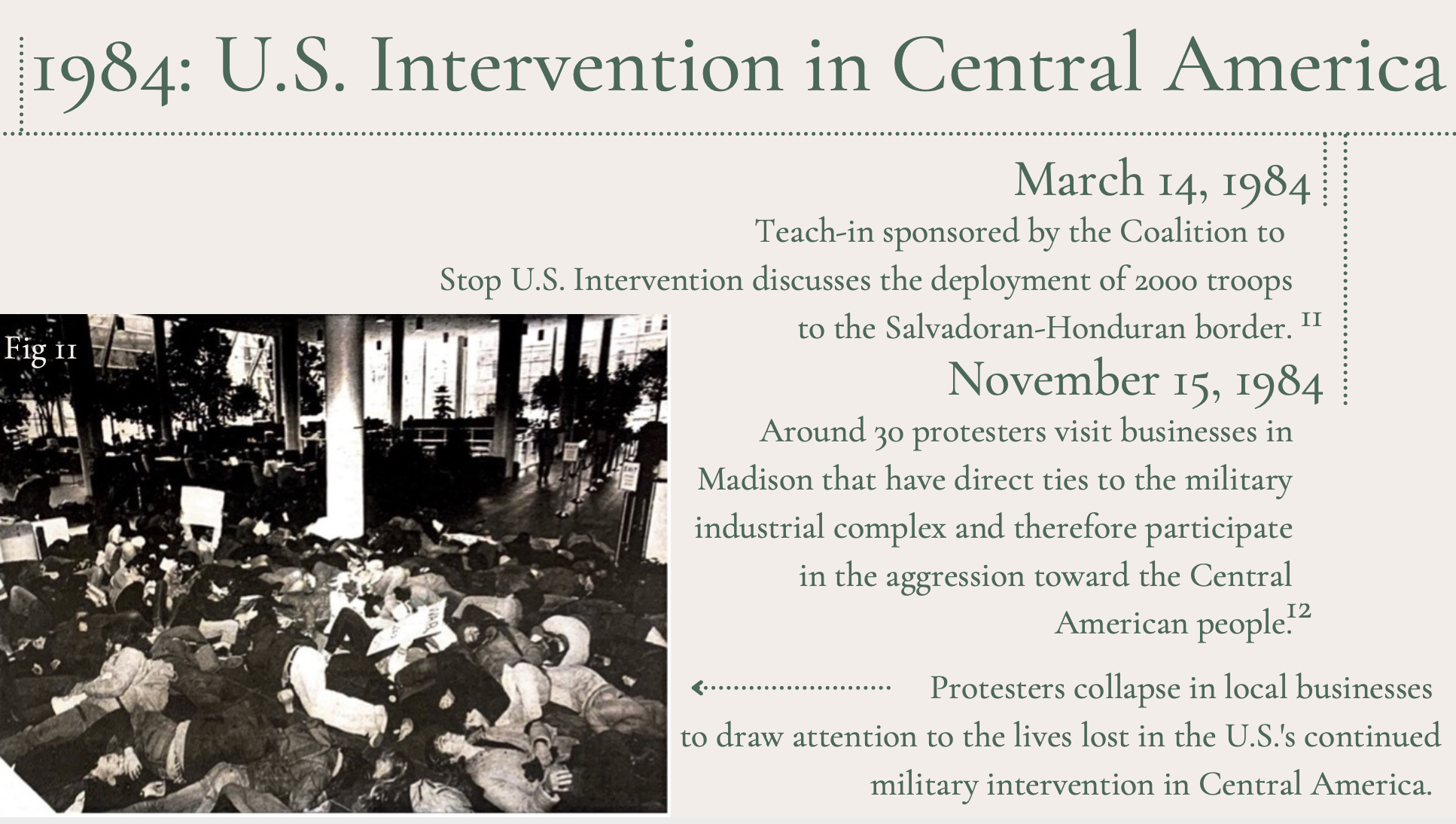 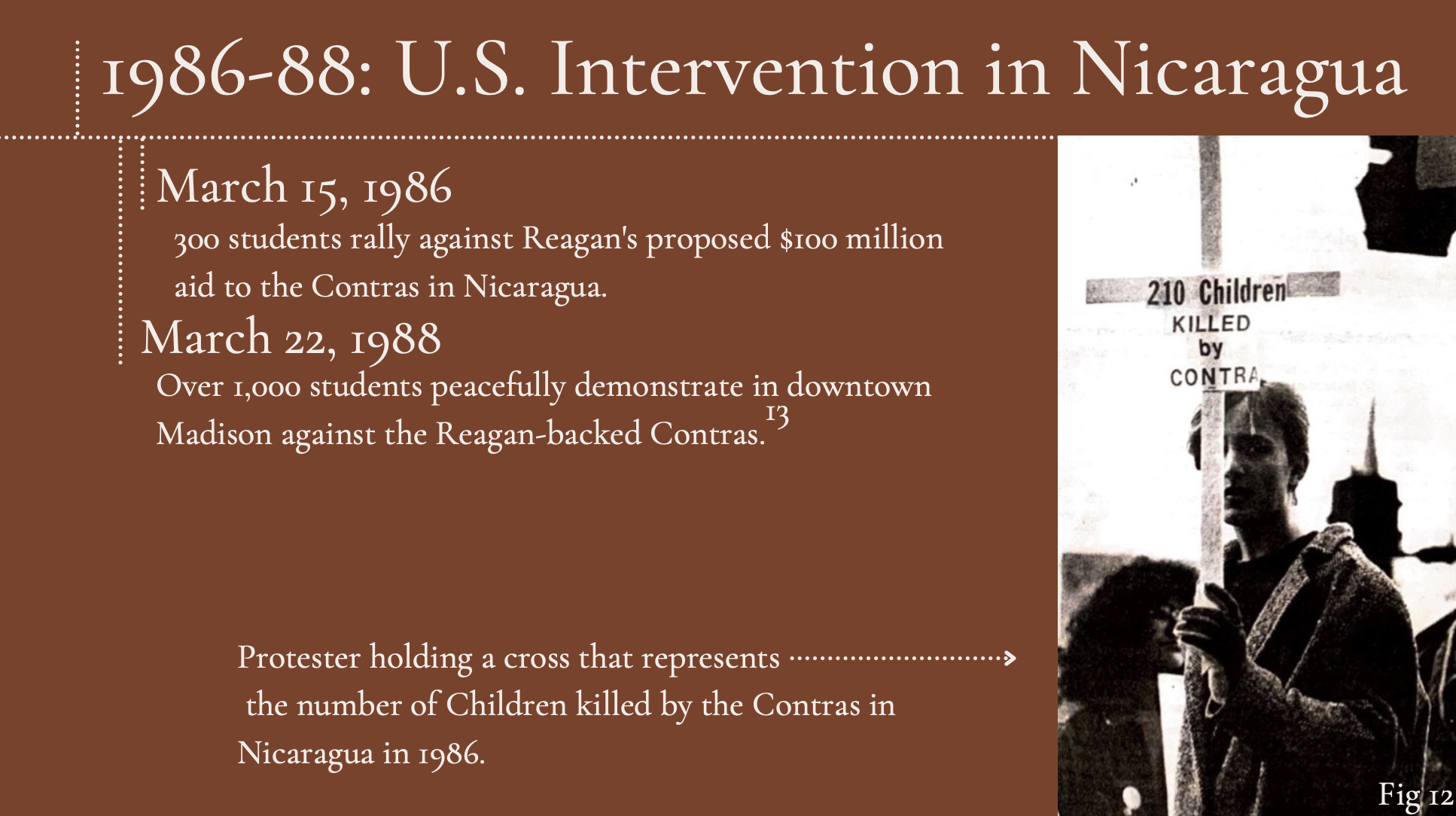